In our time, for example, we’ve been bandying about the term quantum for decades (e.g. ‘quantum leap’)—although the vast majority of us have only the vaguest idea what that means, and actual quantum devices are only now beginning to appear.

Also, remember that the Israelites had just come out of Egypt, which is one of the few places in the world where they would have encountered iron implements—in construction, in the materiel of the military, etc. Like modern Israel with Soviet materiel in the twentieth century, the ancient Israelites may also have captured iron instruments in battle—they just didn’t know how to produce it, or work it, themselves, until much later.

Last but not least, if indeed, as Jewish tradition has it, Moses himself wrote the Pentateuch, he certainly, as a former Egyptian prince, would have had first-hand knowledge of iron.

But if it’s evidence that the Pentateuch wasn’t written contemporaneously that you want, there’s a much more telling indication…

—which Judean editors and compilers of the Hebrew Bible overlooked, and that is a word which is lost in translation, but in the Hebrew stands out like a camel in the Swiss Alps: the word negev נגב—i.e., ‘Negev’—and especially the term pé’at-negev פאת-נגב (‘Negev-side’), which in Numbers 34 and 35 is used in the sense of ‘south’ or ‘south-side’, e.g. 35:5:

If the account had truly been written contemporaneously—i.e., while the Israelites were roaming about the Sinai Desert—the Negev region would not have served as a byword for ‘south’ (as it did in the centuries to come, when it defined the southern border of the Judean kingdom), but if anything as ‘north’, or ‘northeast’, or even ‘east’, which is how it would have been in relation to where they were at the time in question: 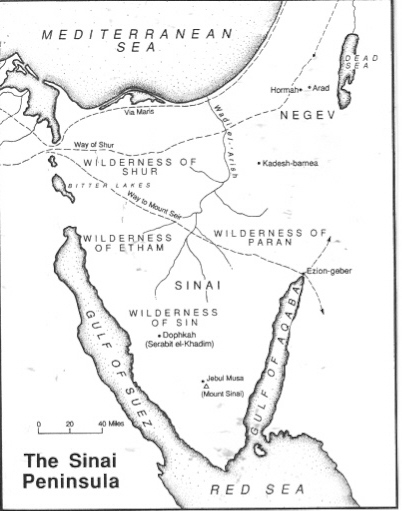 It’s a bit like a Roman referring to Gaul as ‘France’, or members of the British colonies in North America in the late 1700s referring to fellow British colonists north of the Great Lakes as ‘Canadians’, this is a blatant anachronism indicative of a text of much later vintage.

It is little inadvertent slip-ups like this which make the study of the Hebrew Bible so fascinating.

3 thoughts on “Q&A: Do the frequent references to iron in the Pentateuch mean that it could not possibly have been written contemporaneously?”