The names of the Hebrew/Phoenician alphabet were given by the ingenious Canaanite slave(s) who first invented them some time in the 1800s BCE, possibly in Wadi El-Hol in Egypt:

Detail of an inscription on a rock face in Wadi El-Hol, Egypt (near the Valley of the Kings)

The names of the letters were based on the concepts that each letter form resembled (in the Western Canaanite tongue)—e.g. ox head, door, water, etc.—but the brilliant conceptual leap that their inventors made was to say that these forms did not represent those things (that would have made the alphabet merely another pictographic script), but the first consonant of those words. Thus, beit (house) could represent the consonant /b/, gimmel the consonant /g/, etc. (aleph/aluph—ox head—was a letter that could carry any vowel sound that started a syllable).

When the Canaanites were finally kicked out of Egypt in 1550 BCE or so, they took their secret writing code (which was simple enough for anyone to master) with them, using it to deface Egyptian statues and monuments in the Sinai desert: 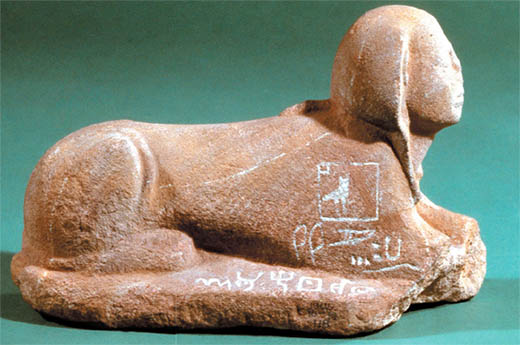 —and, more honourably, for the Ten Commandments, and slowly disseminated it throughout Canaan as they made their way north. By the time it reached the Phoenicians (for they were the most northerly of Canaanites, and the last to adopt it), it had long been in use by the Israelites (who used it as their first Hebrew script—in fact, it was likely they who had made the graffiti in Sinai), the Moabites, the Edomites and other Canaanite nations. Here’s a simulated example of a phrase used in modern Hebrew font samples ( דג סקרן שט בים מאוכזב ):

Ironically, the Phoenicians initially ignored this upstart, common-people writing code (preferring instead to use the prestigious cuneiform writing of Mesopotamia)—until 1200 or so, when it dawned on them that it was actually far more efficient than the cuneiform for keeping records of their trading accounts with their customers (because that’s what they were, first and foremost — sea traders throughout the Mediterranean). At that point, they got their scribes to make a standardised version of it, and began not just using it themselves, but disseminating it throughout their trading posts across the Mediterranean.

Two hundred years later, the Assyrians were also impressed enough to dump the cuneiform in favour of the Canaanite script, and adapted it to make their own script, which we now know as the Aramaic script:

Ironically (again), when the Judean leadership was exiled to Babylon around 580 BCE, they were so impressed with this Aramaic version of the Canaanite script, that they decided to adopt it themselves, for all Hebrew scriptures—albeit only after much anguish and soul-searching, as it meant abandoning the ancient Hebrew script of their forefathers.

Meanwhile, around 900 BCE, the Phoenicians’ Greek customers also realised that this “Phoenician alphabet” (as they called it) was a good thing, and adopted it as is—only changing the names to more Greek-sounding alpha, beta, gamma, etc. And the rest, literally, is history.

(Originally written in reply to a question at Quora.com).